Trial of Steve Bannon, a former Trump strategist, for contempt of court

Former White House chief strategist Steve Bannon, a close confidant of Donald Trump's, was found guilty on Friday of contempt of Congress charges stemming from his refusal to appear before a House committee investigating the events of January 6th in the U.S. Capitol. Officials on the committee termed it "a win for the rule of law." 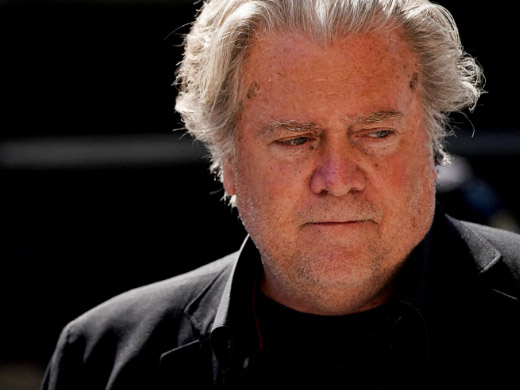 the committee's subpoenaed materials and Bannon's refusal to attend in a deposition were among the charges brought against him. Bannon, 68, was found guilty of both charges after a four-day federal court trial. A jury of eight men and four women discussed for slightly over three hours before reaching a decision.

Depending on the circumstances, he might be sentenced to two years in jail on October 21. A 30-day prison term is the bare minimum for each offence.

That's what Bannon himself said: "We may have lost the battle today; we're not going to lose this war."

His sole disappointment was that "the gutless members of that show trial committee, the J-6 committee, did not have the courage to come down here and testify."

There was no wiggle room for them either way.

In a statement, U.S. attorney Matthew Graves stated, "The subpoena to Stephen Bannon was not an invitation that could be declined or disregarded." He had a legal responsibility to come before the House Select Committee to testify and hand over relevant papers. He deliberately refused to do so, and a jury has now determined that he must pay the price for that refusal."

The committee wanted to hear from Bannon on Trump's attempts to rig the 2020 election. Trump's claim of executive privilege shielded Bannon's testimony, Bannon said. Bannon was no longer a member of Trump's administration in 2017 and was thus a private individual when he was consulted by Trump before to the Jan. 6, 2021 disturbance, according to the House Oversight and Government Reform Committee and Justice Department.

While Bannon's defense team argued that the trial dates "were in flux," the prosecution countered by claiming that Bannon had not refused to cooperate. When the trial began, they pointed out that Bannon had offered to appear before the House Oversight and Government Reform Committee immediately after Trump had waived his objection.

Final arguments were held on Friday morning, with each party reiterating their stance from the trial. The prosecution said that Bannon wilfully disobeyed obvious and specific deadlines, while the defense argued that Bannon felt the dates were flexible and negotiable.

On September 23, 2017, Bannon was served with a subpoena by the House Oversight and Government Reform Committee, which ordered him to hand over required papers by Oct. 7 and testify in person by Oct. 14, 2017. A month after the Justice Department received a referral from a House subcommittee, Bannon was charged in November on two charges of criminal contempt of Congress.

Corcoran told the jury on Friday that such deadlines were really "placeholder" dates as attorneys from both sides worked out a deal.

Because "the committee wants to make an example of Steve Bannon," Corcoran claimed, the committee rushed to judgment.

Additionally, Corcoran made a personal attack on the government's star witness, Kristin Amerling, who testified before the committee on January 6. During her deposition, Amerling revealed that she has been acquainted with one of the prosecutors for many years and that she has been a longtime Democrat.

"Anyone who obstructs our inquiry into these concerns should face penalties, just as there must be responsibility for all those involved for the events of January 6th," they stated. "There is no one above the law."

Prosecutors focused on the Jan. 6 committee's correspondence with Bannon's legal team. It is clear from the email that Thompson did not believe Bannon when he said Trump's claim of executive privilege shielded him from prosecution and threatened Bannon with criminal charges.

In her closing remarks, Assistant U.S. Attorney Amanda Vaughn stated, "The defense wants to make this hard, complicated and confused." "It's not hard at all. This isn't difficult. Because it's as straightforward as it appears, there were just two eyewitnesses.

The defense argued for acquittal on Thursday, arguing that the prosecution had failed to meet its burden of proof. Bannon's lawyer, Corcoran, argued before Judge Nichols that "no reasonable juror could find that Mr. Bannon refused to cooperate" in his request for acquittal.

It was at this moment that Bannon's attorneys told Nichols that they would not be calling any witnesses, since the judge's earlier judgments had rendered his previously planned defense strategies moot. They could not summon House Speaker Nancy Pelosi or any other members of the House panel as witnesses or claim that Bannon believed he was protected by executive privilege, among other reasons.

To defend Bannon and his allies, the Mississippi Democratic Party's Jan. 6 Committee Chairman Bennie Thompson was singled out for special attention. A number of times throughout the trial, his name was brought up, despite the fact that U.S. District Judge Carl Nichols had advised the defense not to argue that the committee was itself politically biased. In his daily speeches outside the courthouse, Bannon repeatedly singled out Thompson by name and said that Thompson's COVID-19 diagnosis from last week was a ruse to avoid appearing in court.

"A triumph for the rule of law and a critical endorsement of the Select Committee's work," Thompson and committee Vice Chair Liz Cheney, R-Wyo., said in a joint statement.